Teaching skills to people with autism 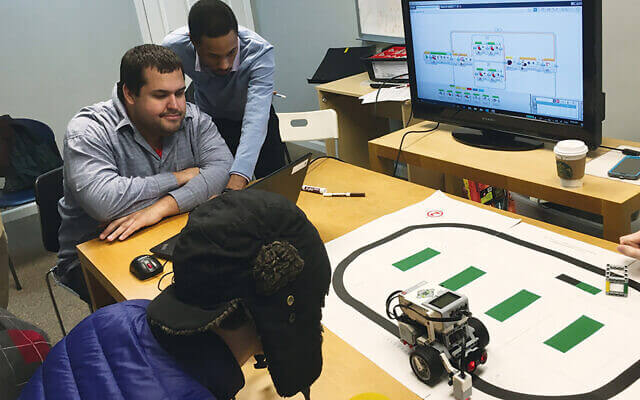 JoyDew members learn how to program a robot

Two Israeli kibbutzniks met and married in Boston in 1988, moved to Ridgewood in 1989, and had two boys. They named their sons Tal ("dew" in Hebrew) and Gil ("joy" in Hebrew).

The JoyDew Foundation, (www.joydew.com) an enterprise creating high-value, meaningful employment for adults with autism, is named in honor of these cherished son _ both of whom are on the autism spectrum.

Like approximately 60 percent of the nine million Americans with this little understood neurological condition, neither Tal nor Gil speaks. This one factor puts them into a category that was unacceptable to their parents, Moish Tov and Anat Klebanov. "Since we don't have any way to measure autism, the definition of high or low functioning is based on one thing: your ability to speak," Mr. Tov said. "Those who don't speak are considered low functioning and the main goal is behavior modification rather than education. People don't realize that they do listen, and they are great self-learners."

Tal, 26, and Gil, 24, communicate by typing on their iPads, a skill they learned at the special school they attended in Denville. Tal recently wrote: "I believe that communication is a human right. … If I need to be understood then I need to have a way to communicate my needs. … When I am understood people can help me with my needs and they can appreciate my ideas."

Today, the brothers are training for careers in medical imaging analysis under the wing of the foundation named for them. "From day one, my wife and I believed our sons could do anything and everything, should they have the right environment, so we worked very hard to get them the right opportunities and it was pretty tough, but we managed," Mr. Tov said. He assumed the same hard work would turn up the right opportunities for employment as the boys inched closer to transitioning from the educational system to the social services system as each turned 21.

A successful entrepreneur, Mr. Tov took advantage of his business travels to meet with people in a variety of countries when the boys were in their teens.

"I had the naïve idea that I was not the only father dealing with this, and I just needed to find the solution someone else had," he said. "But I found nothing even close to what we wanted. What we wanted was to give them the opportunity, like any other young adults, to have meaningful employment and a social life.

"I made a tough decision to sell my company and start a new company that would be the future model for adults with autism. That was around 2011. It took awhile to figure what I wanted to do and how to do it. We did a lot of experiments and pilots; most of them failed but two worked out very well. Based on that, we started the JoyDew Foundation in 2017 and started operating in January 2018." 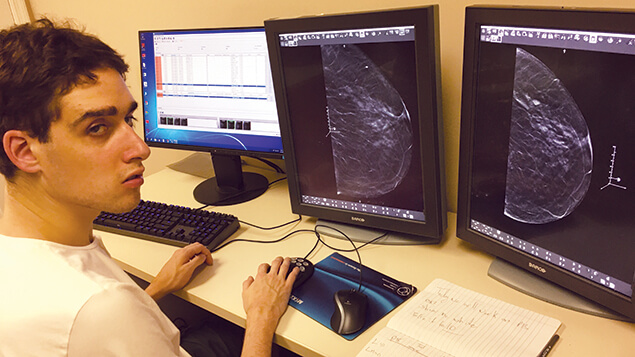 JoyDew teaches promising students how to look at images of breasts to help diagnose cancer.

JoyDew now has 20 members ranging from 21 to 34 years old. All but two are male, as expected given that the national incidence of autism spectrum disorder is 1 in 34 among boys and 1 in 145 among girls.

JoyDew developed an assessment tool to identify the special strengths typical of people with autism spectrum disorder. Though they may not be able to operate in traditional work environments because of their sensory integration or other issues related to autism, many of these adults possess above-average sensory acuity and attention to detail.

"Then we looked into 21st-century types of jobs that use these unique abilities, so they can get jobs not out of charity but because they perform better than their peers," Mr. Tov said.

The careers for which they are trained include digital content management, robotics, pattern recognition, big-data integration, and medical-image analysis.

These are not busywork or warehouse jobs. The trainees can, for example, analyze bank accounts to find evidence of money laundering, or analyze medical breast images to catch early signs of cancer.

"In the different jobs we are training them in now, they are doing extremely well," Mr. Tov said. "The results are above our expectations. We found out when you give them opportunities and respect them and find their strengths, you can teach them like anybody else _ and they learn very fast."

A participant named Danny wrote: "I am very excited about the next decade. It is going to be a very important decade because it will show the results of my hard work in school and JoyDew. I am hoping that my results will be that I can start working in the field of pattern recognition. It will be wonderful if I can move out of my mom's house and live by myself. … I plan to work as hard as I can to achieve my goals."

In addition to job training, the program also offers sessions on such topics as current events, poetry, music, books, science, creative writing, and soft business and life skills. There even is a JoyDew band, for participants with musical talent. "We created an autism-friendly environment to help them flourish and make friends, so it's not just about work," Mr. Tov said. While most high-tech jobs can be performed remotely, the pandemic has hampered JoyDew's progress in getting its trainees into the workforce.

"We started doing small jobs and were in the process of getting to bigger jobs when we were shut down by covid," Mr. Tov said. "Within four days we moved to a virtual format."

This online shift had a happy side effect, enabling people outside commuting distance of Midland Park to join JoyDew's courses and activities, which are offered five days a week. 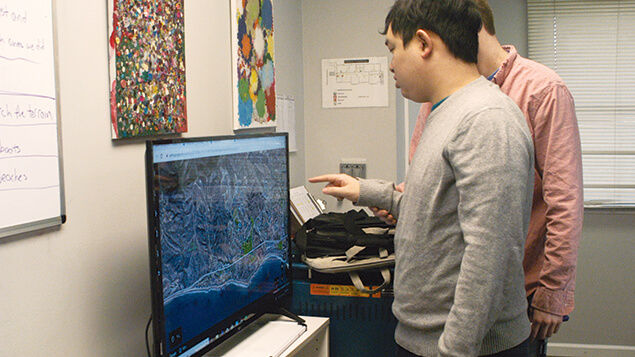 These young men are learning pattern recognition at JoyDew.

“We do have ongoing conversations with a few companies, but it is a slow process right now,” Mr. Tov said. Finding the right managers to speak to is not as difficult as it may seem. “I come from the business world, so for me to go to a company and sell services is pretty much what I did before. We also utilize our network of parents. In our organization, the parents are involved in everything we do. We don't raise money from them, but we ask them to help us apply our approach at home and to help us network in the business world.”

One of those parents, Debbie Marcus of Teaneck, said her son Dov, 28, has flourished in JoyDew. He is in a group of seven who worked with a radiologist to learn how to look for hard-to-see differences in patient mammograms over time.

Ms. Marcus said that after Dov finished public special education at Bergenfield High School when he was 21, he briefly worked in the Yeshiva University library through a program run by Sinai Special Needs Institute_ but then it lost funding.

After that, finding appropriate employment was a frustrating failure. “In one program they were sitting on the floor banging their heads,” she said. “It was horrendous for him. We took him out.”

She had been in touch with the Tovs when they were in the process of establishing JoyDew, and finally, “miracle of miracles, JoyDew started its program in Midland Park and we got Dov in,” she said. “They call their approach Austism 2.0,' a new approach where they see these young people differently and teach them on a high level with such respect.”

Not only did JoyDew identify Dov's employment potential, Ms. Marcus said, but also gave him an outlet for his musical interests and for “discussing relationships with the opposite sex and other things that I didn't even know Dov could discuss. They peel back the layer of fog that many of us cannot, and talk to them as normal people. Dov loves going there, and I can't wait for them to open up again. He misses the social part of it.”

While JoyDew participants come from a variety of racial and faith communities, the program has strong Israeli roots. Before moving to Boston in 1988 to earn a master's degree in computer science, Mr. Tov served in a special forces unit of the Israel Defense Forces for 13 years. His first commander was Major General Doron Almog, who served in four wars and in Operation Entebbe and Operation Moses, which brought Ethiopian Jews to Israel. He also headed the IDF Southern Command from 2000 to 2003. Doron and Didi Almog's son, Eran, was born in 1984 with profound neurological disabilities and severe autism. Eran spent nine years in a facility run by ALEH, Israel's largest network of residences for children with severe physical and cognitive disabilities.

In 2000, knowing that Eran soon would age out of the system, his father spearheaded the establishment of the first ALEH facility covering residents' entire lifespans. It recently was renamed ADI Negev-Nahalat Eran Rehabilitation Village. “I knew about the village Doron created for his son Eran,” Mr. Tov said. When he was starting to gather ideas for what would become JoyDew, his sister in Israel encouraged him to reinitiate contact with his former commander. The two men sat down for what turned into a five-hour conversation in 2011. That led to several pilot programs. 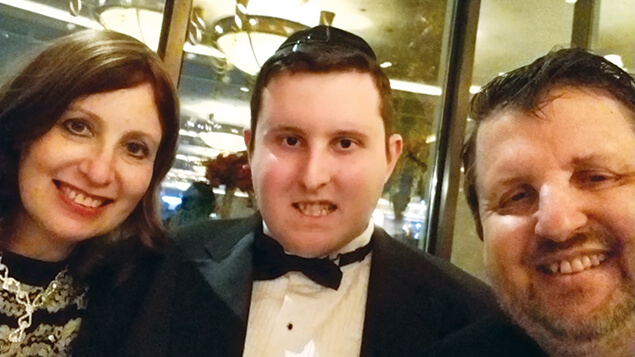 Deborah and Robert Marcus with their son Dov. (Courtesy of Marcus family.)

“We did some things that didn't work, but one thing that worked well was Roim Rachok” - Looking Ahead - a program that trains adults on the autism spectrum to analyze aerial and satellite images, Mr. Tov said. This is a skill valuable to the army, the national intelligence agency, and the civilian market. Roim Rachok proved to be quite successful and has changed many lives for the better.

“Israel was not one of the places that I thought we'd have anything at the standard we were looking for, but it's a country of innovation, and everyone knows someone who knows someone,” Mr. Tov said.

In the United States, Mr. Tov also became involved in an initiative that provides iPads to autistic children who cannot speak. He had seen how this gave his sons the gift of communication and wanted to extend the opportunity to other children. “It's still working beautifully,” he said of this project.

The need is growing constantly. The American Academy of Pediatrics estimates the prevalence of American children with a parent-reported autism spectrum disorder diagnosis is 1 in 40, while a U.S. Centers for Disease Control and Prevention report released last March found the prevalence to be 1 in 54 among children who were 8 years old in 2016. That was a 10 percent increase from 2014.

“When Tal was born, it was 1 in 10,000,” Mr. Tov said. “We don't know why, but it's growing fast. And more and more individuals on the spectrum are coming to the adult world where there are no services.”

The CDC estimates that 5.4 million Americans 18 and older, or about 1 in 45 adults, are on the autism spectrum. And for that reason, Mr. Tov and Ms. Klebanov are determined to replicate JoyDew across the country. Meanwhile, plans are in motion to move the Midland Park operation from the adapted house where it is now located to a purpose-built facility on a campus intended to include semi-independent housing options for participants.

Realistically, not every JoyDew member will attain the ultimate goal of meaningful employment, Mr. Tov acknowledged. But all of them will gain sustainable progress in communication, behavior regulation, and the ability to develop their innate capabilities.

For information on JoyDew's services or how to invest in its expansion, email Ms. Klebanov at anat@joydew.com